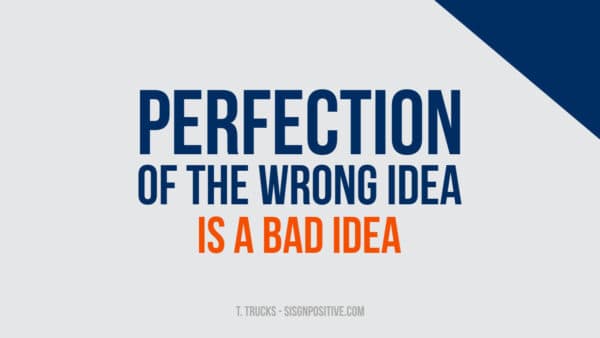 Often, as an entrepreneur, you have to turn off the noise. You have to stop listening to what other people are saying and do your thing. Some of the greatest ideas and inventions have been brought into existence in spite of what others think.

In the midst of the chaos of creation, it’s good to regularly take a pause and evaluate.

Is this what I wanted?
Am I missing something BIG?
Is there any collateral damage?
How many people am I helping?
Is the cost still worth it?
Is this the right thing?

Clearing the calendar and the smoke for a day or two to think deeply about these types of questions will save you lots of money, but more importantly…TIME. Perfecting the wrong idea is always a bad idea. Some of our ideas should be executed, and others should be executed.

Doing the right thing is more important than doing the thing right.

Lord, who shall abide in thy tabernacle? who shall dwell in thy holy hill? [2] He that walketh uprightly, and worketh righteousness, and speaketh the truth in his heart. 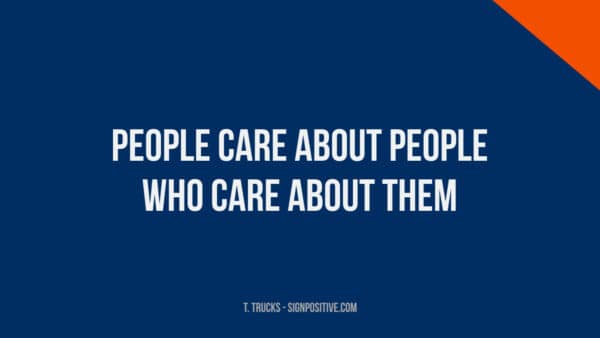 Are you the Head Honcho? The big cheese?

I remember an old saying, “If you want a fresh drink of water, go to the head of the stream.” In other words if you want the truth, ask the person who knows; or if you need permission, ask the person with the authority to grant it. Many systems and organizations are so opaque and complicated, it’s hard to find the head.

Here are a few things we can do to keep our organizations flowing freely.

Allow failure.
An environment where small failures are actually praised and shared is magical. When people are allowed to TRY without fear, new ideas come to light. A few winning ideas can be a game changer.

Encourage and invest.
People care about people who care about them. When we CARE it positively affects productivity and bottom lines; but more importantly, it changes lives.

Everyone has a BOSS.
Regardless of where you are on the ladder, you have a boss. Like it or not, one day you will be asked to give account for your work.

When I consider thy heavens, the work of thy fingers, the moon and the stars, which thou hast ordained; [4] What is man, that thou art mindful of him? and the son of man, that thou visitest him? 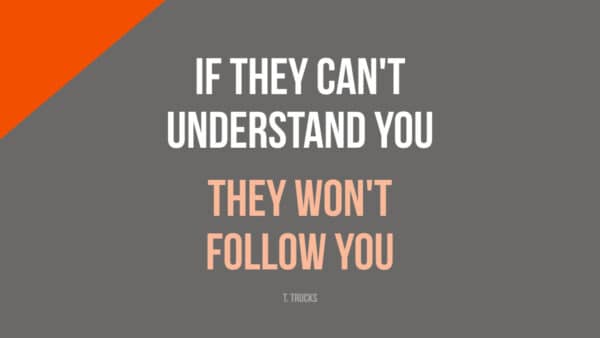 The explanation is just as important as the vision.
If they can’t understand you, they won’t follow you.

So they read in the book in the law of God distinctly, and gave the sense, and caused them to understand the reading. 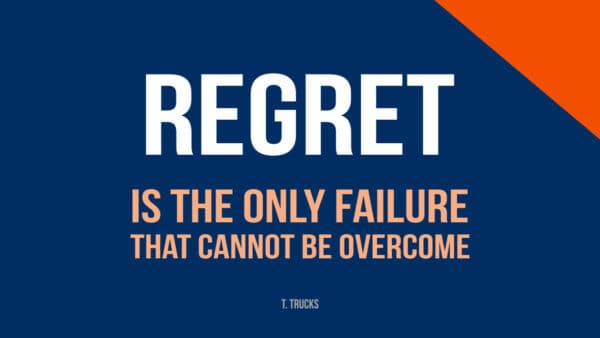 I often use the phrase, “Spin Up”. It’s just a loose way of saying, get better over time. This morning, while reading Nehemiah 1-2, a process for the phrase became clear. You could call it The Success Cycle.

1. Need
This is the starting point and the inflection point for the success cycle. When you first start, you see there is a lack of understanding or ability within yourself. Later the need is exposed by action and adversity. Either way, it’s up to you to see it and then take the next step.

2. Preparation
School, apprenticeship, mentors, reading, and learning. Preparation can take place in a classroom, pasture, factory, or kitchen table. Build a solid foundation that will not crumble under the weight of what is coming. Beware that you don’t get stuck here. There are many would-be success stories that find comfort in preparation and turn it into procrastination.

3. Opportunity
Your preparation has sharpened your vision and you can see the possibilities. Choose and take the next step.

4. Action
I have always said, there is real magic in action. Action is the separator between success and failure. Face the fear and seize the opportunity. Remember, regret is the only failure that cannot be overcome.

5. Adversity
If you are in the game, seizing opportunities and acting on them, you will run up against adversity. Whether procedural or personal, adversity will expose your weakness and need. Embrace adversity because it will show you where to start your next cycle.

Now, the next time I say “Spin Up”, we will both know exactly what I’m talking about. 🙂 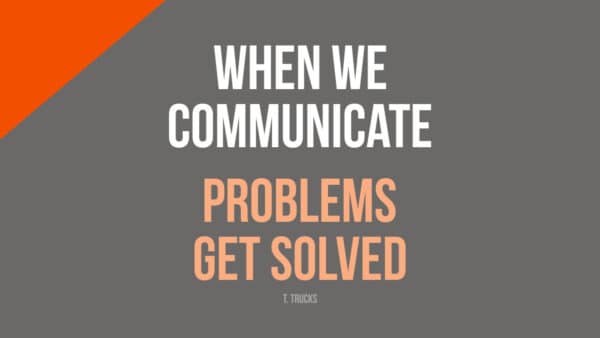 Seldom is it a good idea to discuss problems and disagreements with a third party. This backward mode of communication creates gossip, negativity and rot.

Here are a few things to help when having an uncomfortable face to face.

1. Be humble.
No matter your position, communication and correction is better received with humility.

2. Never attack.
“You are a terrible person because you did this.” Wrong! Avoid personal attacks. The action is usually the problem, not the person. “I’m sure this wasn’t intentional, but when you did X it caused Y?” Focus on the action.

3. Show you care.
If you do the first two, it will open the door to have a conversation. When we communicate, problems get solved.

4. Face your fear.
We all love sunshine and roses, but nothing grows without a little rain. Call it for what it is, embrace it, and step into the fear. If you can have the conversations when they are needed, you can avoid the thunderstorms. 😉

Debate thy cause with thy neighbour himself ; and discover not a secret to another: 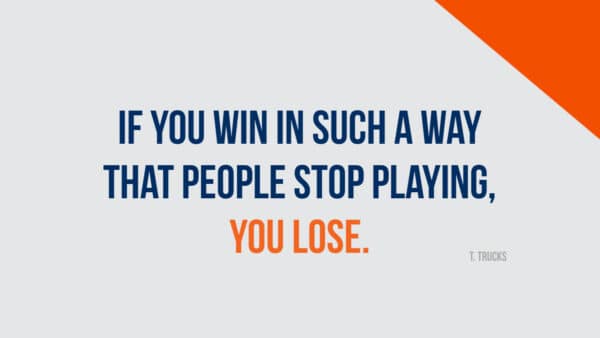 Competition sports have a winner and a loser, but they also have a next season. If you think about it, almost everything from sports to business to politics to life works like this. We play to win, but we also play to keep playing. Don’t get so consumed with winning that you sacrifice the other players or the game itself. Honor, grace, and truth are just as important as hard work, dedication, and willpower.

If you win in such a way that people stop playing, YOU LOSE.

Buy the truth, and sell it not; also wisdom, and instruction, and understanding.

Don’t study excellence. Study the diligence it took to get there.

If you can’t do the first one, the other three won’t matter. 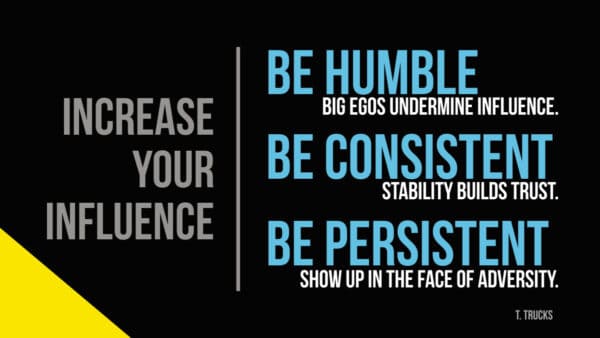 In a junior position, we often don’t realize the influence we have and the importance of “leading from below”. Not only is it possible to lead from a subordinate position, it’s potentially as important as being in charge.

At some point we will embody almost all of the positions above. Each one comes with different responsibilities but they all have one thing in common, INFLUENCE. Whether top down or bottom up, when we communicate with humility and genuine concern, our voices are heard and they make a difference.

Increase Your Influence
Be HUMBLE. Big egos undermine influence.
Be CONSISTENT. Stability builds trust.
Be PERSISTENT. Show up in the face of adversity. 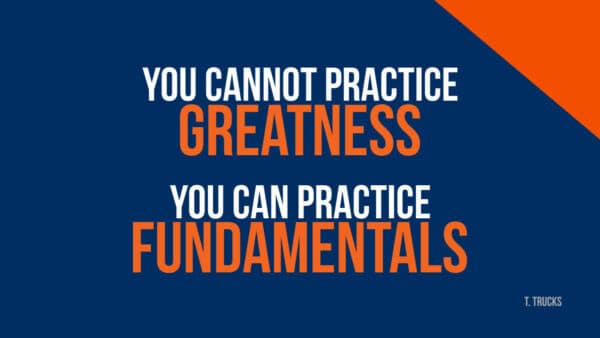 As Naaman turned away in a rage he began to mumble. I have traveled for two days, had to go through all the diplomatic crap to get across the border, I even brought a million dollars in silver to pay, and what do I get? A command to go dip seven times in the muddy Jordan River? BULL CRAP! I won’t do it! Saddle up boys, let’s go home. This was a total waste of time.

In his country, Naaman was considered a man of valor. He was a mighty warrior who had made a lot of money in battle for his king. But Naaman had a problem, he had the disease of leprosy. When Naaman’s king got wind that there was a prophet in Israel who could cure leprosy. He sent Naamna with a letter to the king of Israel. The letter read something like this… Here is my servant Naaman, please cure him of his leprosy.

The king of Israel is distraught when he reads the letter. He knows this is impossible and thinks the letter is some kind of encoded message sent to start a war. The prophet Elisha hears of the king’s distress and tells him to calm down and send Naaman to him for instruction and healing.

So, here we are, Elisha the prophet didn’t even come outside his house to talk with Naaman, he sent one of his servants to give Naaman the prescription. Go wash in Jordan seven times and your leprosy will disappear. Long story short, as they were riding away, one of Naaman’s subordinates convinced him to follow the prophets simple instructions. He did it and was healed.

Leadership, like anything else, is based on fundamental principles. Here are a few we can learn from the story of Naaman.

1. Great leaders keep their emotions in check. Naaman went away mad, but calmed down quickly.

2. Great leaders can lead from any position. Naaman’s subordinate shows great leadership when he addresses his concerns.

3. Great leaders listen. Naaman showed real leadership when he listened to another point of view.

4. Great leaders remove ego from decisions and allow the best idea to win. Naaman showed why he was known as a man of valor when he changed his mind.

You cannot practice greatness.
You can practice fundamentals.

Are not Abana and Pharpar, rivers of Damascus, better than all the waters of Israel? may I not wash in them, and be clean? So he turned and went away in a rage.